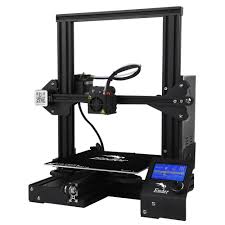 I have recently started dabbling with 3D Printing – the to print cases for various projects and other useful items is quite appealing to me. I settled on the Creality Ender 3 Pro as a  between good stock performance, price, and upgrades. It’s worth noting at this point that 3D printing is still very much a ‘DIY’ hobby and requires some work on the part of the user to get the best out of it.

Out of the box, it should print just fine if you have set it up correctly it should print OK, but many people have found the print bed is not 100% flat. There are many fixes for this, some swear by glass plates or mirror tiles, but I didn’t have much luck printing on glass, I just couldn’t get prints to stick! I opted for a PEI sheet instead which has worked flawlessly for me

I decided to go for an auto bed levelling solution, and after much reading decided on the BLtouch. My first attempt was with a cheap Chinese clone (triangle labs) which was too inaccurate to use, so be warned!

Ok, so out of the box, the Ender 3 doesn’t support the BLtouch, it also doesn’t contain a bootloader required for flashing new firmware, so we are going to need a couple of extra bits to get us going. (See, I said it was DIY!)

I followed this excellent tutorial from Teaching Tech here:

HOWEVER I did not install the TH3D firmware, I used vanilla Marlin instead (see below)

Once you have the bootloader installed, time to flash marlin and set up the bltouch

forget to set your Z

Now what these two tutorials go into is the start and stop GCODE needed for the printers. Here are mine:

That’s pretty much it, you should now be printing with no adhesion problems at all!